This was the setting for a jazz concert. It was a part of the Mayflower Jazz Series hosted by Maxine Michaels. It was in a magnificent backyard which included several decks on the house, a fire pit. walkways through the woods filled with local flora and fauna including deer, a meandering stream, places to sit and just enjoy the surroundings.

The concert itself took place in front of a massive tent which was erected over a basketball court. There were other tents for beverages light refreshments and vendors. All the food and beverages were complimentary. The weather was perfect. It was easy to just sit and enjoy. 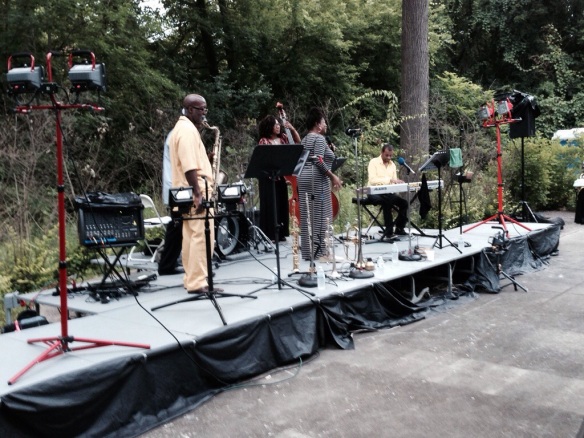 The musicians were all well known in the Detroit area. The music was very good and in that environment was so relaxing. The musicians played for a set and during the intermission, a guest singer, Sydney Ellis sang several songs including “Summertime”. The song tends to be so over done that he here have been times when I have just left a venue during a poor rendition. This offering was so good the song was a fresh again I my mind.

After the music stopped for the break, I wandered around the grounds. I got up to the house decks and enjoyed the view( the second picture). The decks had quit a bit of seating and had enclosures with mosquito netting. The only distraction during the evening were the various bugs that chose the audience for dinner. I followed the meandering stream back down the hill. 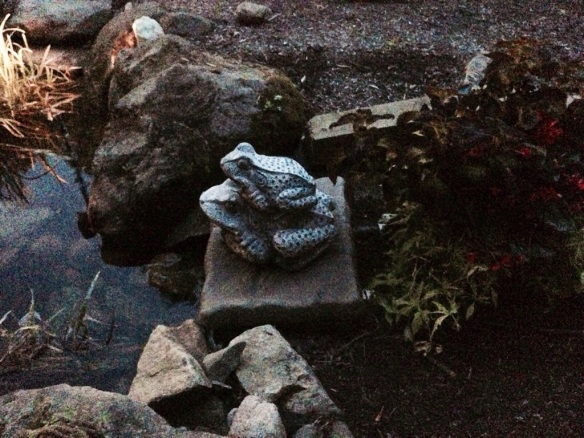 By then, the sun had set and the paths were lit so walking in the uneven grounds were not a problem. I got back to my table just in time for the second set.

The second set went well and I was feeling so good as I left or the evening after the set. 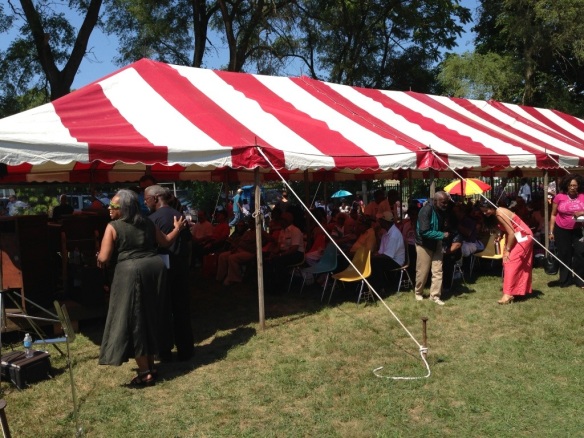 For the last three years, the St. Monica and St. Augustine Roman Catholic Church in Detroit near the Indian Village neighborhood has hosted Jazz on the Lawn on a Sunday afternoon in August. It is a seven hour program and people come and leave as they wish. The parking and event are free. There are food and refreshment booths and raffle tickets. Many bring lawn chairs and sit in the shade of the the many large trees. This last Sunday it was about 80 degrees F and there was a slight steady breeze making the day a perfect day for the concert. I sat under the tent for about three hours of the program. 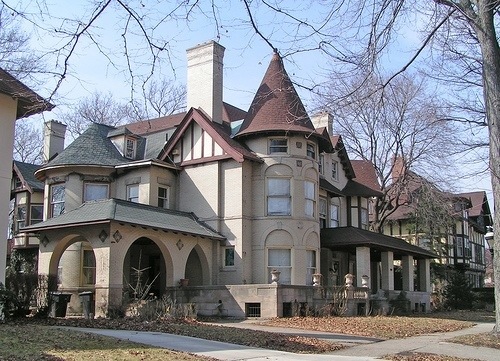 When I arrived the the group playing was the Tasilmah Bey(keys) group. I spent a few minutes talking to some people i knew before any listening. The others were Marion Heyden(bass), Djallo Djakate (drums), Larry Gabriel(gtr,mandolin) and Kasan Belgrave(clarinet). The only complete number I heard was” When the Saints Go Marching In”. It is a real crowd pleaser and they did it

The next group was the Duncan McMillan Trio with Duncan McMillan(Hammond B-3 Organ), Michael Gabriel (gtr) and George Davidson( drums). The Hammond B-3 is a large, heavy instrument and it took time to get it all set up but the sound of the instrument is rich and nuanced. Duncan introduced each song with just a bit about the song. It was good to hear and so different than usual. So often, the musicians just play a song in the bar or club setting without saying what they are playing. He started with “On a Clear Day You Can See Forever” which is played often enough so it is familiar and not so often it is overdone. It is a little more complex than most and is one that I like. They did one of Duncan’s original compositions named “A Change of Rhythm” base on the chord progressions of “I’ve Got Rhythm”. And he did another crowd pleaser of “Over the Rainbow”. Michael Gabriel was showcased in a couple of the numbers. It was a good set of familiar numbers not frequently done. 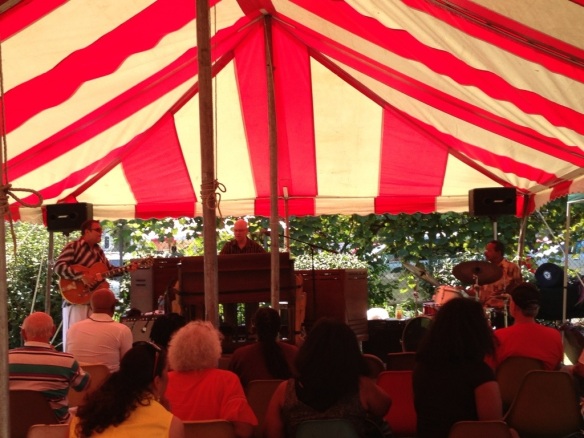 While they were moving the organ off the stage and setting up for the next group, I wandered over to the food tent and got a pulled pork sandwich. Most pulled pork sandwiches have some sort of sauce or seasoning. This one did not. There was a table and we added our own seasoning which did not work well. I generally do not like the kind of food offered at festivals so this fit right in.

The last group I watched was the Marion Heyden Quartet including Marion Heyden(bass) , Robert Jones(keys), Michael Brown(drums) and Renèe King Jackson(vox). The vocalist is from Memphis where jazz and R& B meet so she sang with those influences plus a touch of gospel. Robert Jones is one of the original Funk Brothers and has an outstanding repertoire and delivery. Marion Heyden was one of the first female instrumentalists to be recognized as an excellent musician in her own right. She is a lecturer at University of Michigan, Dearborn and is referred to as professor. There is no CV on the website and the site does not list her as a professor so I think she is an adjunct lecturer. Renée announced her numbers in a completely different way. She never announced the name of any number. Instead she named to person who was most known for doing the song assuming the audience would know the song. So, I didn’t know the name of some of the songs and probably never will because it is not one of my favorites like she thought. The one song she did that I really liked was “Damn Your Eyes”. The group did a good job on all the numbers. They really got into it one this one.