Yesterday I decided to take a walk in the park with my 14 and 1/2 year old dog, Bonnie. It was a beautiful sunny day. I usually walk Bonnie in the neighborhood and it was not energizing her this year as it had in past years.

The path in the park is between one and two miles. There is a enclosed playground with many children. There are grills and picnic tables. A stream wends its way through the park. For the most part, the path follows the stream. 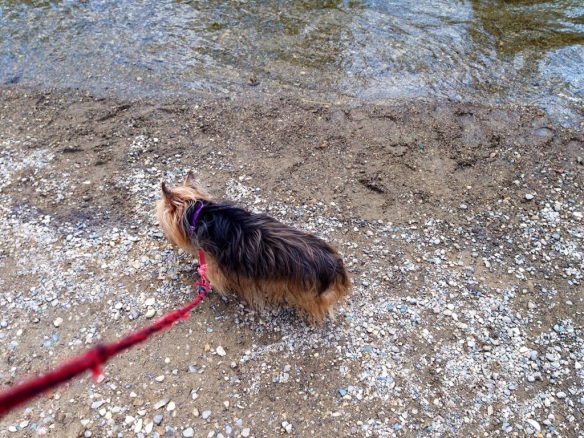 It was a joyful walk. Bonnie tried to run after squirrels. When she went down to the stream, it reminded me of a former dog who would give me a fish eye before trying to dive in the stream. She made it once into the stream. Bonnie perked up at the sight of other dogs, runners and joggers. We socialized with several dogs and their owners. Bonnie loves to meet and greet other dogs. By the time I ended the walk she was strutting her stuff again. I was tired. 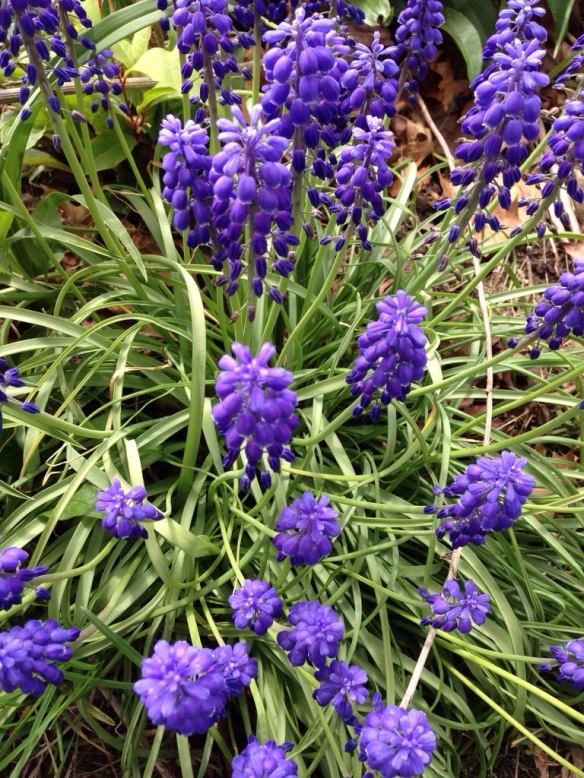 The trees are budding
The hyacinths are blooming
A late Spring is here.

I haven’t posted for quite a while for various reasons and hope I’m back.

This winter in Detroit has been brutally cold and we have almost reached the all time record for snow. The Spring is much colder than usual so we may pass the record of 91.7 inches. We only have 1.9 inches to go. It was too much for my car that had two major repairs. I just got another car and retired my faithful older car with 175,416 Miles

This kind of weather means a lot of little things. I had to shovel a poop path for my small elderly dog at least a couple of times a week. When she came in from the cold, she walked stiffly on her arthritic legs. She is beginning to get her Spring legs. In the bright sun, even her dimming eyes can see the squirrels in the yard. This last winter, the squirrels began to bury nuts in the snow. With the snow gone, my backyard is littered with nuts and squirrels. My dog, Bonnie, is chasing the squirrels again and getting faster every day.

I am working quite a bit now and will have sometime off soon.

It all started when I was shopping to take something to my son’s house in Ohio for Thanksgiving. I thought cheese would be a good afternoon snack while waiting for the turkey. While I was walking through a local store, I noticed some cheese samples and crackers. I tasted one of the cheeses and it was ok. Then, I tasted another cheese and my immediate though was that this was the best cheese I have ever had. The cheesemonger suggested another one and it was almost as good. I got the Red Dragon and the Wensleydale with carmelized onions. The Red Dragon is cheddar combined with ale and mustard seed. It is a wonderful creamy cheddar with a bite at the end with the mustard seed. The cheddar with the carmelized onions has such a depth of flavor, it is amazing. I took both of them on my visit. And they were eaten in short order. When I got home, I got some more. They are so rich that one or two crackers are enough. The smell is so strong that when I open one, my dog Bonnie makes an appearance at the kitchen door. Her nose knows.
It is overwhelmingly wonderful.
I already had the Havarti with dill and extra sharp cheddar on hand. Then, I got a Christmas package from my aunt and brother and more cheese with the apples and pears. I’m just so glad cheese lasts a long time if it is wrapped carefully. 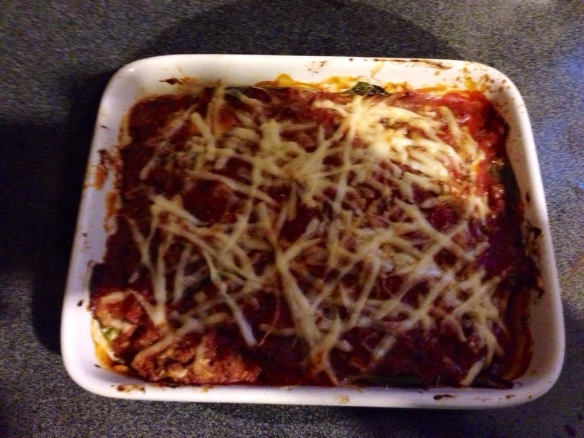 I decided to sort of make up a recipe for something that resembles eggplant Parmesan. It just hit the spot and was quite good. There were three slices of breaded eggplant in the bottom covered with spaghetti meat sauce. Then, a few gratings of Parmesan Reggiano. Then a layer of spinach. I added another layer of meat sauce over the spinach. And on the top, more grated cheese. I put it in a medium oven for one half hour. There was much less cheese than usual but I used very good very flavorful cheese. It is much lighter than most Eggplant Parmesan which is just what I wanted,.

Saturday is not my favorite day for grocery shopping since it is more crowded that usual. I ended up shopping since I had a coupon for free bread that was expiring on Saturday. I also used the five dollars off meat coupon. The good part of Sturday shopping is that there are people, usually women, who are giving samples of food hoping the shoppers will buy.

As I was walking by the deli counter trying not to look, one of the sampler women was pushing hummus and pita chips. She was telling the shoppers that this is a low calorie snack and we could eat as much as we want because it it low calorie. The picture above is one serving of the hummus and pita chips. It is about two tablespoons of the hummus (1oz.) at 40 calories and three pita chips (1oz.) At 78 calories. Or 118 calories for one serving of both. I stopped to talk. I told her that eating a lot of the product adds calories. She continued to tell me how low calorie it was. There was no example of a serving on the table although she did mention correctly that it was two tablespoons.

I was planning on buying the hummus and pita chips so I picked up what I wanted and started to leave.
She tried again. ” Take the large size, its low calorie.”
I asked her if I ate the whole package would I still not gain weight. This caused her to pause.
She relied on her sound bite. “It’s low calorie.”
I gave up. I was stunned that two people could have such a different thought process. I’m sure she had been told what to say about the product and possibly didn’t think about it. I can tell you that when I was in sales I checked the hype and had a different message than the canned one.

A great way to start my day with applewood smoked bacon, blueberry pancakes with maple syrup and cups of Sumatra coffee.

Marsha in the D
Blog at WordPress.com.