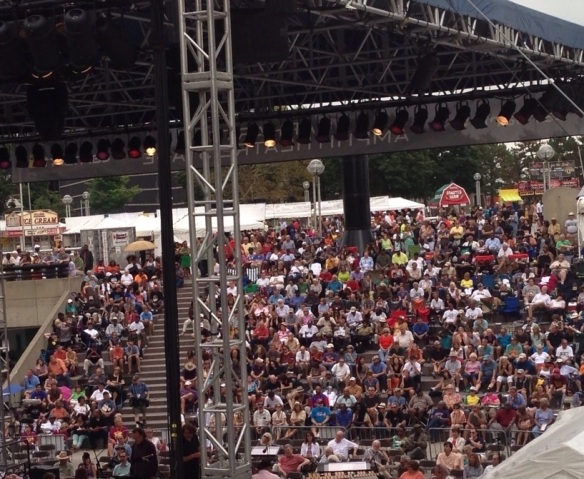 I wandered over to the Absopure Pyramid stage to expand my jazz listening. One of the things I can do at this festival is sample all sorts of music other than what I normally hear.

After lunch I went to the Absopure Pyramid stage to see Dave Liebman( sax, flute) and Richie Beirach(piano). I got a seat with no problem. The music was dissonant, abrasive and edgy. If I had never heard jazz before I would say that I don’t like jazz. As I listened, I began to hear different things. I relaxed and began to enjoy the music. I could hear how closely the musicians played against each other weaving in and out moving the emphasis from one instrument to the other. By the time they played “Pendulum” which they recorded at the Village Vanguard in New York City in the late 1970s, my original opinion had changed. Both of the musicians had incredible expertise. The music engaged and stimulated my mind. I was hearing the meshed, cohesive music as they worked together to create sound to remember. In fact,I got so engrossed that I forgot to take a picture.

The next act at the stage was a group I had seen and enjoyed before so I decided to stay for part of the performance. This was a tribute to Don Byas who was a legendary bebop jazz saxophone player. This tribute similar to the Teddy Harris, Jr. Tribute on Saturday which also focused on bebop. The tribute was performed by James Carter(sax), Gerard Gibbs(piano), Dr. Leonard Moon(drums), Theo Croker(tpt) and Ralphe Armstrong( bass). James Carter was playing a restored Don Byas saxophone probably played from 1950 to 1962 by Don Byas. James Carter called Don Byas the harmonic link between swing and bebop.

I stayed to listen to “1944 Stomp”, “Free and Easy” and “Stardust”. As I listened, I could hear both the elements of swing and bebop which was true of all the songs I heard. When they started the “1944 Stomp”, chills went down my back. That is how well this particular set of musicians has an emotional connection with me. My favorite of the group is James Carter who has an emotionally charged saxophone. It can be mournful, energetic, engaging, intellectual or adventurous. So for the time I was there, I was on a wonderful emotional roller coaster.

I headed over to the Carhartt Amphitheater with a dual purpose. The act just coming up was good and the next acte after that one was Ahmad Jamal. Although there are reserved seats for VIP (those who pay), there are never enough seats if all of them show up at the main stage. I got a seat near the middle of the third row. I was overjoyed.

The next act was called the Alan Broadbent Trio featuring Sheila Jordan. The trio was Alan Broadbent(piano), Cameron Brown(bass) and Sean Dobbins(drums). There was also a string orchestra behind the trio. The music was for the most part both soothing and enjoyable without n edge. I had seen Sheila Jordan before and really did want to see her again. All the edge in th performance came from her lyrics. She will be 85 in November.

Sheila was not hitting the notes at the beginning of the performance but as the performance went on, she was sounding very good. When her voice warmed up and she began to scat, it was all there and magnificent. Before she did ” Seek Your Hearts Desire”, she mentioned that she did not sing professionally until she was 58. She is an inspiration. 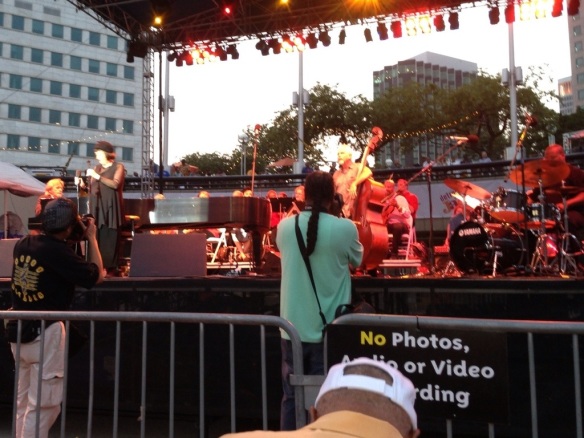 And finally, Amad Jamal alone his quartet. The quartet was Amad Jamal(piano), Reginald Veal(bass), Manolo Badrena(percussion) and Herman Riley (drums). The last time I heard Ahmad Jamal, I was watch from behind the stage way up on the hill. All I heard was his playing. This time, sitting in front, it was a very different listening experience. All the music depended on the wonderful driving beat behind the keys. It was amazing as were all the musicians. There were times when the bass was the forefront of the beat. Other times when it was the drums or percussion. For the most part, the bass was main driver and the bass playing was wondrous.

On both “Voodoo”and “Saturday Morning”, there was the familiar Jamal soft piano touch with the driving beat behind it. They did “Poinciana” and a few other numbers. As the encore they did “This is the Life”. It was, for me, one of those transcendent musical experiences leaving me with a quiet happy mind.

I decided to go to an after the festival jam. I did not go to the DJF sponsored jam at the Marriott since last year it was overcrowded, couldn’t hear the music and got no service. A friend was at the Harbor House and I went. When I arrived, it was crowded and noisy. The music was not to my liking. I told my friend that I had to go. And go I did to Bert’s where the music was good. And finally home and happy.