My Grandmother’s dressing table and my inadvertent selfie.
I have lived in and around Detroit for so long that I am now a Detroiter. I haven’t visited my hometown of Minneapolis and environs since my Mother’s funeral. My Aunt Betty has been asking me to come for quite for some time and I finally decided to go for a short family only visit. My brother, Bruce, is living with Aunt Betty. He is a chef and I wanted to taste his food again.

When I walked into the room where I would be sleeping, a rush of memories came back. The room was furnished with my Grandmother’s furniture. In the picture above, it is my Grandmother’s dressing table. I lived in her house for a some time and can remember seeing her at the table putting on her makeup. The picture came flashing back. Aunt Betty reminded me that she kept gum in the top left drawer to freshen her breath. And I remembered that I carefully removed some of the gum on occasion.

There was also a dresser, rocking chair and a reading lamp with an adjustable height so Grandfather could read in bed without disturbing anyone. I used the lamp to read at night. As I used it, I remembered it.

Although I haven’t talked about it much, I am a quilter. I am doing a Grandma’s Flower Garden quilt. I have seen so many of that pattern and none of them have seemed quite right. My Greatgrandma’s quilt was on the bed and it was just right.

the best part of seeing it for me was that it was so well done. It shows a beautiful color sensibility and exquisite quilting. I can only hope that my version will be half as nice.

My seasonal job is preparing taxes. I hear a lot of things and I keep it confidential. But, there are times when I look at a client and think, what if… The following is a fictional account of a tax interview.

Ms. Renee Dupuis in the chair opposite me to have her taxes done. The person who has done her taxes before was not available so she had to take someone new to her. The preparer was experienced but, Ms. Dupuis wanted to make sure and asked her some questions. Finally satisfied, the preparer was allowed to start the return.

As usual, the talk was more than just taxes. Ms. Dupuis was born in France and preparer was planning on a trip to France. They talked a little about the Musée D’ Orsay and all the great impressionist art in the museum. They compared the cathedral at Chartres to the Notre Dame and agreed that the hand carving at Chartres deserves more attention then it gets. Ms. Dupuis mentioned that four Catholic churches in her area were closing. Her church was closing and at 73 she did not want to make a change to a new church. She decided to attend one of the churches that was not one that was designated.

She began talking about a family reunion she had missed in Paris a few years ago. One of her teenage ‘crushes’ said he had missed seeing her at the reunion in an email brimming with passion.

She had missed the reunion due to a surgery and when she recovered, she visited him in France where they had a torrid, passionate affair. The preparer kept typing tax information into the computer and occasionally asked a question. Although the question were about taxes, Ms. Dupuis answered the questions and continued with her story. Her friend had visited Detroit where the affair continued with the same enthusiasm. Unfortunately, he was married.

The preparer sneaked a glance at Ms. Dupuis. She had a smile on her face as she recounted the events. After he we not back to France, she went to confession and promised not to do it again. And she didn’t with him. She began to tell the preparer about the wonderful gentleman friend in her apartment complex. 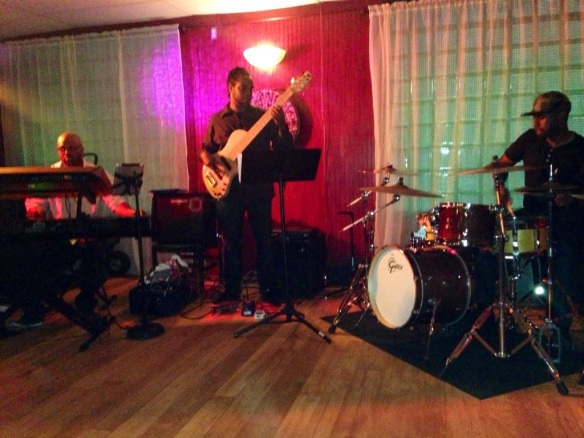 Friday September 6, 2013 was a work day for me. I work. The work I do keeps my mind active and since I am meeting the public, I am always “on”. I had a long debate with myself when I got home about whether to go out for some music on Friday night. I had spent so many hours listening to so many great musicians the weekend before that I wasn’t sure my brain could hold any more. Work does tend to put my mind in a busy place and music tends to help me quiet my busy mind. So I was in my busy mind place and decided to go out and quiet my mind.

I hadn’t seen the Trio Nomadian for well over a year and thought Motor City Wine would be a good place to go. They call themselves serious jazz fusion which has many stylistic origins and has long improvisations. The group(pictured above) is from left to right Demetrius Nabors, Damon Warmack and Nate Winn. Seeing a group after a hiatus is one of the best ways to hear internal changes to the music. I had been away so long that I really couldn’t remember how they were before last Friday. They did their own compositions this evening. Demetrius’ composition was ” Full of Peace” and Damon’s was “By the By”.

This was the first time I had heard Demetrius’ composition. At first, I didn’t hear why he had named it like he did. Eventually, it did have peaceful elements. After the break, they played Damon’s composition. Two other musicians, Timothy Gay(sax) and Chris Johnson(tpt), joined in. 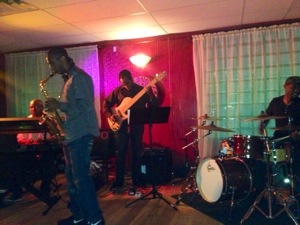 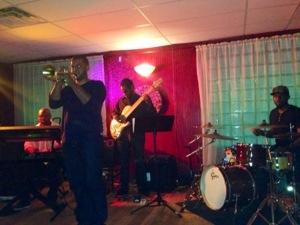 Since the additional musicians were not familiar with the song, Damon said it followed basically a C Minor blues structure. The way they played it,it had it all. It was both melodic and dissonant. It was both soft and loud. There were tempo changes from slow to fast. I could feel my body vibrating to the music. I left after the song. I was on a short leash since I was also working on Saturday.

I went over Bert’s Motown Room to hear the John Douglas Quartet, my comfy jazz. I ordered my club soda and lime and got possibly one of the nastiest surprises I had had I a long time. The soda was absolutely flat and it had been flat the prior Sunday. It was disgusting. I’m tempted to bring my own.

On the other hand, they were playing “Softly, As the Morning Sunrise” when I walked into the place. The quartet on stage was John Douglas(tpt), Sébastien Levanneur(bass, from Paris, France), Alex White(dms) and Michael Malis(keys). Once I got over the drink, I sank right into the music.

The music sounds much better in this room. Perhaps, another bonus is that it became a jazz room. People stopping by to be social and have dinner were in the other room. So the room was quiet while they were playing. It got even better when Dwight Adams, trumpet, joined.

The notes from Dwight’s trumpet are so clear, either high or low notes. I remember once a couple of years ago walking up behind a stage at the jazz festival and hearing a trumpet. I mentioned to my granddaughter that I hoped she would hear Dwight Adams before she left town since I thought he played as well as the trumpet we were hearing. We got to the stage and it was Dwight Adams. A couple of other musicians joined the group. They were Steve Hunter on trombone and Brad Stern on alto sax. I left at the break so I would get enough sleep for work the next morning.

When I was sixteen, I visited a girlfriend in Wolf Point, Montana for the Wolf Point Stampede(rodeo). The picture above is the parade for the stampede. My girlfriends mother was mostly absent so we were left to our own devices. Her mother owned the hotel so you can imagine how midnight snacking was a step above what I was used to at home.

A lot of the rodeo people were staying at the hotel. I was from Minneapolis, MN so it was such a different way of living. The town in normal times had a population of about 2,500. Within two days, I was being greeted by name and found out about communication in small towns. I was amazed that all the stores could be on one street. It was a place where the only elevator in town was in the hotel.

We spent a lot of time at the Stampede. Not only did I see my first rodeo. I got to meet many of the riders. The rodeo people all knew each other and saw the Wolf Point Stampede
as a warm up for the Calgary Stampede. There were real cowboys and Indians everywhere thwt did not look like any movie i had ever seen. I got to try barrel racing and had fun with it.

My friend was called a breed meaning she was half white and half Indian. She had told me but I saw that it meant that some people didn’t talk to her. It also meant that amount the kids she was friends with both whites and Indians.

During that brief summer so long ago, she introduced me to my first love. A handsome tall Assiniboine Sioux young man with piercing blue eyes who was a year older than I was. We fell in love and saw a world in each others eyes. We went to the Sweet Shoppe and talked for hours. He showed me his home on the reservation so different than my home. I met his parents and they were so nice to me.

They both has Masters degrees in English and weren’t allowed to teach so they were wheat farmers.

He was a bright young man and when I talked, he listened. I had a new friend. We walked by the banks of the Missouri River saying nothing just walking. We sat by the river with our toes in the water. I got sunburned and he showed me a plant that took away the sting. When the sun went down and it got cold, he gave me his jacket. He told me of his hopes and dreams and I believed him. We wanted to get married.

Instead, I took the long train ride home.

My mother hid all the letters he wrote. She told him I wasn’t home when he called.

We got in touch twenty years later and he had realized many of his dreams. I learned today that he passed away and I found I still had a piece of my heart that was his.