It was a rainy, windy evening and I decided I needed some music. The wind was so strong that the dog was huddled up to me as I looked over the possibilities available for the music I like on a Wednesday evening in Detroit. There were about four “regular” choices. I decided on The Mighty Funhouse who play every Wednesday evening in the Corktown area of Detroit.

I was surprised when I got to the parking lot to see how crowded it was on a Wednesday and then remembered that a lot of people are off work or in town for the holidays. I walked in to the sound of the music and virtually no place to sit so I got a lemon soda and stood at the rail looking I to the room where the music was being played. After just a bit a girlfriend tapped me on the shoulder and showed me an open spot next to her and her friend at the bar. I usually don’t sit at the bar and so this was a fresh perspective. As I saw people I knew, there were hugs all around and I felt at home again listening to the music.

The present composition of the Funhouse produces an unusual sound. Each of the musicians usually plays in a different genre.

Skeeto Valdez has the most experience in rock and funk. He also plays drums in a jazz group frequently. He is a master at several genres and the organizer behind the Mighty Funhouse.

Phil Hale usually plays either jazz or R’n’B.  As with many Detroit musicians, he started playing at an early age in church.

Paul Randolph has most of his musical career out of work Detroit so what I see is that he does blues and vocals at this venue.

Finally, there is John Douglas who primarily plays jazz. Although I have heard him play swing and R n B. 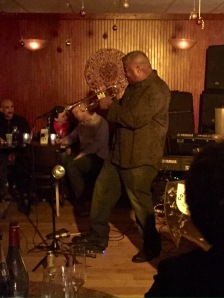 Last night one of the other patrons and I were trying to figure out what genre we were hearing. We just could not find a good answer. This band is borrows from all the genres I have mentioned and you can hear all of them in the sound. A normally straight forward blues tune will have a little jazzy overtone provided by John Douglas.

They usually do “Ain’t It Funky Now ” which is a great number to showcase all their talent. I was able to leave with a happy brain.