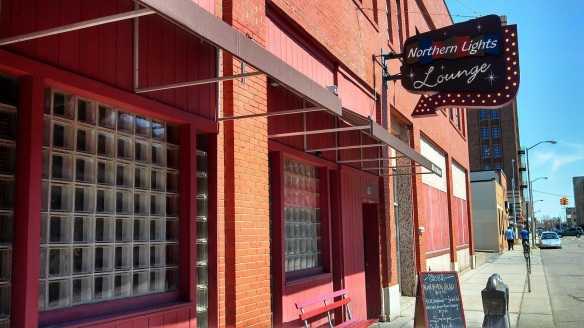 I usually work on Wednesday and my work was not the best on Wednesday. I had an appointment at 6:00 p.m. She called about 6:15 and said what she had would only take a few minutes and she could be there in five minutes. It took 15 minutes. She arrived with a disordered pile of papers. As she talked about what she wanted, I knew it would 2 hours if she could find the paperwork. I did one minor task and set an appointment for Friday. She took my personal pen because she “sneezed” on it.

So, when I decided to go out for some music and dinner, I was peeved. I got to Northern Lights Lounge well after the first set started. The music was good and this time I looked at the menu. I remember hearing someone say that the chicken strips were really good. So I ordered chicken strips and onion rings.

I closed my eyes, relaxed in my chair and listened. It was pretty much what I liked and expected. The trio was Mike Jellick(keys), Jesse Kramer(dms) and Miles Brown(bass). Mike mentioned that they were trying some new stuff. And there was some experimentation using sounds other than keys on the keyboard. I thought I heard something that sounded like a little funk which was also new.

My dinner came just as the set ended with “Benny’s Tune”. When my meal was placed in front of me, I noticed the paper was not able to absorb the grease.

I stayed for the first number of the second set as my stomach was slowly twisting in protest. The first song was written by Miles Brown and called “Blues for AJ”. I really liked the number and just was not able to enjoy as much as I usually would.

Going home was my best option. Today I feel much better and am back to eating veggies, fruit and the food that makes me feel good.